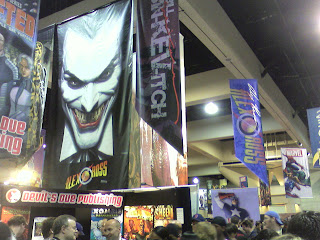 From the sacred halls of the San Diego convention center there now emanates a smell of ass, old pizza boxes and melted plastic. This can only mean one thing; Comi-con is over and the geeks have returned to their parent's basements. A greater collection of obese, dorks could not be assembled if you purposefully crashed a cruise ship full of M.I.T. tech students into a summer camp for fat kids. You could count the collective number of used condoms used in one night stands this weekend on one hand, if you only had 3 fingers. Take the kid who pissed himself in grade school, the neighbor who constantly gives you unsolicited advice on building a better lawn and add the sexually frustrated boyfriend that your sister had to get a restraining order against and you've got Comi-con! I just happened to be in my favorite town of San Diego(fuck you! It was merely coincidence!) and i have done it all at least twice before so, fuck it! I gobbled up some eggs this morning and asked the English lady who sat next to me at breakfast to say, "You're going to marry a commoner? Never, I say." She just looked at me like i shit on her toast and tea and asked the waiter for another seat. So, off I went and it was a rough start considering the first dweebs i saw on the trolley were dressed as spidey and venom. A slap wouldn't have sufficed. I wore my head phones all day to avoid people. There is nothing worse than having a virgin initiate a conversation on the complexities of living on the green lantern's home world. Mostly, I stared at all the weirdos, though there were some cool costumes and a girl in green cos-play gave me a free hug. When I had to sit, I made sure it was next to a pretty girl (size 14 and under though rarely possible), cuz I'll be damned if I'm sitting next to some creep in a Gandalf outfit or a middle aged man in a Harry Potter t-shirt.
Top 5 random thoughts as a walked the floor:
1. " I swear to god I'm going to murder the cocksucker who invented pokemon."
2. " Jesus, that's Margot Kidder rummaging through that box of discounted toys. How the mighty have fallen."
3. "If my son ever comes home with a pair of little plastic wings sewn into a tunic I will take my own life."
4. "I never realized the importance of healthy semen until now."
5. "I bet a thermite reaction in this place would put a huge dent in ratings for "Lost" this coming season."
Alright, it wasn't all so bad. Aside from having a handicapped guy give me a dirty look (fuck him, I was shitting myself and his little scooter was too slow) and having a moron shake a felt tip marker till the ink went flying all over my arm, it was a good experience. I got tons of SWAG and i bought a cool book on writing horror stories and got a kit for painting dragons. So, I guess that geeks are OK in my book. I just consider myself really lucky i discovered pussy and beer in high school.
Posted by All Other Blogs Blow at 10:44 PM

Email ThisBlogThis!Share to TwitterShare to FacebookShare to Pinterest
Labels: March of the Psychos

HEEEEEY, WE WANT SOME PUUUUUSSSAAAY 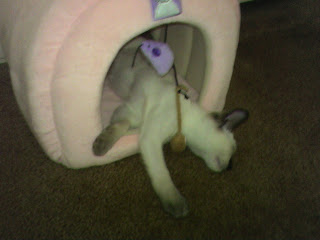 My new cat. He is adorable. A blue eyed Siamese rescue kitten. The Chihuahua loves him, despite his arrogance. His name is Leon, but for the record that is short for Don Corleone. I spent the week in Monterrey Bay and some of you was hatin on me cuz of the picture I sent out. Hey, I can't help it if I'm a sucker for rubbing it in.
I am having production delays on my film. I still have a couple of scenes to shoot and one of my actors has flown the coup. Not to mention the problems with the editing software. But, I will persevere and this film will get made. I'm just not sure how yet????
Posted by All Other Blogs Blow at 1:19 PM