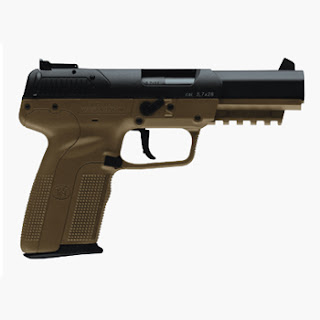 I've spent the last two hours cruising the net reading up on the Fort Hood tragedy. So, I'm trying to discern whether this is just the story of some degenerate that can't deal with life who goes out and kills people or if he's a terrorist hell bent on destroying our way of life; apparently those are my two choices. And I come across this picture on the web. It's the type of gun he used. It's made by a company named Herstal owned by the Herstal group of Belgium. They have been making weapons since 1889 and their current client list includes NATO. Apparently they have a real hard on for death or at least for helping Americans and crazed clients worldwide quench their thirst for violence.

Americans own 2 million guns and according to the Guardian UK the FBI has been sifting through 7 million more applications, like the one Army Major Nidal Malik Hasan received, since Obama became president. This soldier, who by some accounts was so gentle he fed a pet bird from his own mouth and suffered racial slurs throughout his career in the army, is now the central figure in this terrible tragedy. The media has associated him with the Sept. 11th bombers. His religious views, which some are saying accounts for his opposition to the illegal wars we are still engaged in a year after we were promised CHANGE, are the focus of media reports that tell us a witness heard him yell, "god is great" in Arabic. And now Joe Lieberman, who has lost his fucking mind at this point, wants congress to investigate and decide on whether or not this incident could be called a terrorist attack; the consequences of which could be potentially disastrous for Muslims in this country. The blogs are teeming with messages from assholes demanding a good ol' fashioned dragging to peacenik commies who are admonishing us all to, "just take a breath."

Nations are fighting a dozen small wars around this world in places that don't register on the limited internal GPS taught to us as children. Violence is as normal a concept to us as would be a gun show next door to a kindergarten. Was this a terrorist attack? I think this was a terrorist attack, plain and simple. I think that it was an assault on innocent people. I believe the assailant of this crime to be the worst type of terrorist. But the true perpetrator, although believed to be apprehended, won't face any charges. As long as we, as a species, continue to accept that violence can resolve what words cannot; until we have grown tired of brutality as sport, a remedy for dissent and a means to punctuate our intentions and while we continue to think that sending our young to die on foreign land and we allow them to lose hope on neighborhood block; we will never, ever cease to bring to justice the true perpetrators of violence upon our kind. They will instead be rewarded through our ignorance with our blood and billions of dollars in compensation for creating the best tools for ending human life.

Hasan is a terrorist, the same way that weapons manufacturers, corrupt governments and other masters of propaganda are terrorists; by proxy, by definition and by consent. Until we, the victims of these terrorists, demand that civilized societies be defined by the daily acts of compassion their citizens show towards one another, we will always be on the hunt for terrorists, we will forever be doomed to watch our youth die in conflicts and we will never cease to see terrible tragedies unfold in the headlines, and the Hasans and Herstals of this world will continue to spread misery, hate and sorrow.
Posted by All Other Blogs Blow at 12:39 AM